Have you ever been amazed by fireworks and wanted to know how they work?

In FWsim you can make your own virtual fireworks and recreate the fireworks you see in the night sky by combining and customizing components. In order to create your own realistic pyrotechnic devises, having the knowledge on how real fireworks work can be really valuable.

Aerial Shells and how they work

Contrary to popular belief, pyrotechnicians do not actually use rockets. They instead use shells. In FWSim, you can simulate both shells and rockets. 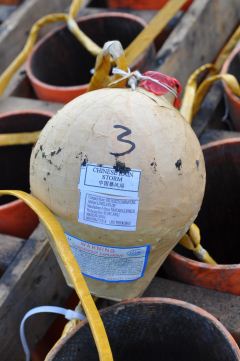 A shell is a sphere of pyrotechnic ingredients wrapped in paper. Shells are typically between 2 and 12 inches in diameter (that’s 50-300mm). In order to fire a shell, it must first be placed inside a mortar tube that is usually made from metal or plastic. Consumer-grade fireworks, which are usually smaller in size from their professional counterparts, can actually be fired from thick cardboard tubes; these cardboard tubes are often a part of the packaging of said products.

An adequately-sized firework fuse (that’s “visco fuse” for consumers and “quick match fuse” for you professional folks out there) is attached to the shell going outside of the mortar. A small amount of black powder called a lifting charge is packed inside of the shell casing. This propels the shell into the air once ignited (combustion reaction).

Through the action-and-reaction force (Newton’s Third Law of Motion) applied by the ignited lifting charge, shells reach their maximum momentum right after leaving the mortar. Another fuse (time fuse) inside the shell is lighted by the lifting charge. This lifting charge triggers the explosion after a few seconds. This is called the bursting charge and it is usually made out of black powder. It ejects several burning stars. Generally speaking, shells are designed to explode at their highest point.

While you look up in the sky being amazed by fireworks, have you noticed that they don’t all look the same? There are many different kinds of pyrotechnic shells and they all look different. Here are just a few kinds of shells commonly used around the globe!

Most fireworks you see will be peonies. This is the most common type of shell. It’s just a simple shell casing (spherical or cylindrical in shape, depending on where you are located) with a lifting charge, bursting charge, and stars of one or more colours.

This type of firework shell is the one you most often see near or at the finale on shows because of just how elegant it looks against the dark night sky. The brocade is similar to a peony in composition, but with one important difference: The stars burn without color (they are invisible) and they drag tails behind them. These tails are usually silver or gold in color

This is a very special effect that looks quite unusual. This shell has a smaller bursting charge compared to most effects, but the stars burn for a long time and eject tails all the way. The effect you get is a glitter that slowly expands and falls down. The horsetail is THE shell to usewhen doing very slow and emotional songs in a pyromusical!

This is the go-to shell when designers want to fill the night sky with stars and generate a large “wow” from the audience! The crossette is a type of shell wherein the stars are much bigger than in the peony. After a few seconds of flight time, the stars explode again and split into four parts.

Multibreak Shells (or Shell of Shells)

As the name implies, multibreak shells explode multiple times. It’s like the Russian nesting dolls of fireworks! How it works differs from country to country but usually it is a large shell containing stars and a few smaller shells with their own delay fuses and stars. So the shell would explode once, followed by several smaller explosions shortly thereafter. Italy, Malta, and Japan are the most well-known countries producing this kind of shell with their own twist on how they make it. 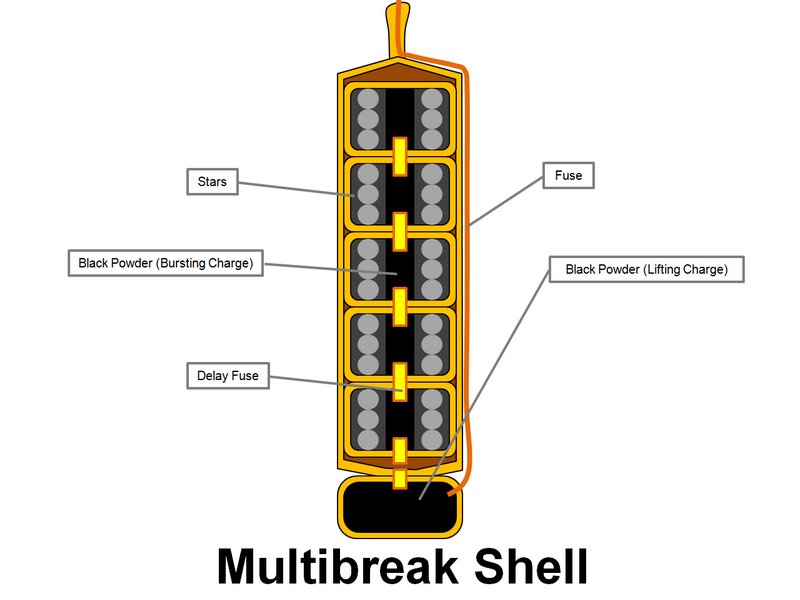 Want to try and make your own virtual fireworks shell? FWSim got you covered! With our effects editor, you can simulate the shell *physically accurately**. You can select the launch velocity, size, time delay, and explosion size. Alternatively, you can also just set the size of the shell and FWSim chooses all the parameters automatically.

To create a multibreak shell, simply add several explosions to a shell. Alternatively, add “Shell of Shells” to the main explosion - this causes the sub-shells to be ejected and fly some distance before exploding again.

As for crossettes, once you’ve made your basic shell with stars, there is a drop panel when you click on the stars wherein you can select to add a crossette options to the stars.

For more information, please refer to the Effect Editor Manual.