In FWsim, a firework is made from components. Components can contain other components.

An effect forms a tree structure, for example:

There are several main components, which form the basis of all fireworks. For example:

The main component in this firework is a shell. The shell contains two sub-components.

Shells are the basis of most professional fireworks. They are launched from mortars, and explode after a certain time. Shells have a certain diameter. The bigger the diameter, the higher it flies and the longer it takes.

If you want greater control over the flight path, just click “Custom”. Most of the time, this is not necessary.

Shells contain one or more Explosions.

The mine is similar to the shell, but it stays on the ground. This component can also be used for roman candles and fountains. When you build a mine, click onto your Stars and set their Shape to “Mine”. This makes the stars go upwards, instead of in all directions.

A cake consists of any number of further fireworks, which are fired one after the other. Just add your fireworks to the cake. You can also import existing fireworks using the button at the bottom. In the list, you can select the order of the fireworks and how often each one is fired. The “Interval” slider at the bottom controls the pause between two shots.

Using the textbox next to the effect names, you can adjust the interval for each shot individually.

By ticking the boxes, you can perform operations on all selected items (repeat, and delete).

“Add Existing Effect” adds an effect from your library to the cake.

Usually, all shots of the cake will shoot at the same angle. Using the controls in this box, you can change that.

The available shapes are Z-shape and W-shape. “Shots per Sweep” controls how many different angles there are. “Start Angle” controls the maximum, to the left and the right.

Real cakes always have some variance in their interval, so that several cakes of the same type can fire faster or slower. In FWsim, you can control the amount of variance precisely:

A bengal flame sits on the ground and produces a very bright flame. You can adjust the color and the duration.

Most consumer firework rockets produce sparks while they fly upwards. If you want the sparks on your FWsim rockets, add an Ascent Effect to the Rocket.

The catherine wheel (also called “sun”) turns and emits sparks. You can adjust the radius, burn duration and speed.

Note that in comparison to other fireworks, the catherine wheel will look rather small. This is not an error - big fireworks go up to 300 meters, and all firework effects in FWsim have realistic scale.

Ascent effects produce small sparks while the shell or rocket flies through the air. The parameters are the same as for tails.

Shells and rockets contain black powder, which explodes after some time and releases glowing stars. In fireworks lingo, this is called a “bursting charge”. Parameters:

You can add multiple explosions to a shell. This is called a multibreak shell: The explosions trigger, each one at a certain time, and the shell is gone after all explosions have triggered.

Explosions can release Stars, Whistle, Tourbillon, Farfalle, or smaller sub-shells (this is called “Shell of Shells”). The energy determines how fast they fly.

Stars can be added…

You can add to an explosion or eruption. By rotating the stars relative to each other, you can create a wide variety of effects. For example: 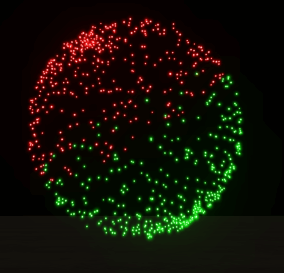 Tails can be added to stars. A star with a tail creates sparks. Every star drags along its own tail: 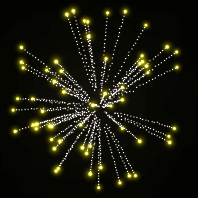 You can add Crackling to your Stars. When they burn out, the stars will emit many small sparks that fly away and produce a sharp sound. This effect is often seen in consumer firework rockets.

Crossette can also be added to Stars. Four identical smaller stars will fly away when the main star burns out.

This component ejects multiple smaller shells, which fly away and explode after some time. You can add an explosion, ascent effect, stars, etc… - just like a normal shell.

The Whistle component can be added instead of stars. They produce sparks and a whistling noise.

The Tourbillon can be added instead of stars. They fly in a spiral and produces sparks.

Farfalle can be added instead of stars. They fly like stars, but produce two trails of sparks on either sides.

An ascent star is a star that’s attached to the outside of a shell. Parameters: